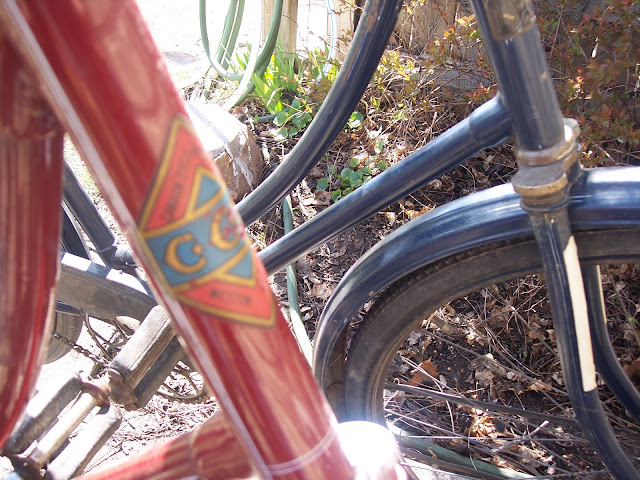 Ever since Cousin Anna's short but historic visit, I've come to realize that mountain bikes are not for me. It's not just that she's strong and gorgeous and totally ripped (in a feminine way, of course) but she has a good bike. The kind of bike that intuits where you wish to go, and goes there. A bike that transfers thought into SPEED. A bike that says, "it's GO TIME!"

So I went to Lumpy Bikes, our local hole-in-the-wall bike repair shop, to see what I could get for my (enormous, horrid) hand-me-down mountain bike. Peterborough people—go check out Lumpy Bikes. It's awesome. A cross between Aladdin's cave, grandpa's garage, and buddhist garden.

Wilbur is the bike man at Lumpy Bikes. He takes them apart and puts them together. He cunningly sells them. He has all the skills of a used-car salesman, such as flattery, quick life-style appraisal—is this customer likely to want quality vintage? A student who just wants to get around? A collector? A mad woman who craves speed (in the Newtonian sense), likes old things, and hauls kids around with her? How much is she willing to pay?

But unlike a used-car salesman, Wilbur is his own mechanic. He shows passion for a job that doesn't bring much money. He takes pride in finding the right bike for the right customer. He's more like Yente the Matchmaker than a car salesman.

And he introduced me to Julian. Julian is a lime-green racer, about forty years old. No markings on him, but his gears and main mechanics were milled in Japan, according to Wilbur. (Wilbur knows bikes. I asked if my bike looked Italian to him? It looked Italian to me. Wilbur didn't really think so—darn. I was hoping that a bike from Tour de France 1979 had mysteriously shown up at Lumpy bikes, unrecognizable under it's lime-green spray paint....never mind. Julian is perfect the way he is.)

We've always given our cars a name. Our current vehicle is Jill. I can't remember the corolla's name—it was functional and boring, never gave us cause to address it. The mercedes was Hildegarde and she was definitely a temperamental hausfrau.

Ships and vehicles are always female. But what about bikes? Opinion is divided at the Pemberton house. It seems obvious to me—I mean, you drive a car, but you ride a bike. I'll let you come to your own conclusions about the sexist double-entendres, but my main argument is a personality one. To me, bikes are blokes.

Anyway, my bike is a bloke. A good-looking limey. And I've kind of fallen in love with him. (Will, this shouldn't cause any real alarm—it's the only affair I'll ever have. Unless a really sweet old Bianchi shows up at Lumpy Bikes....but not before the student loans come in.)

But back to Wilbur. Wilbur also has a heart of gold. He fixes up old bikes "just to run" and gives them away to homeless men and women downtown. Peterborough people, if you have any broken bikes, please consider donating them to Lumpy Bikes. In the past couple years he's fixed up and given away more than a hundred. Wilbur is also a photographer. He takes pictures of our town's poor and needy (I know there's a socially correct expression, but it's escaping me right now) and is having his first exhibit at our local art museum this year. He's a good sort. Our community needs more Wilburs.
Posted by Flying Squirrel at 9:05 AM 13 comments:

A cute baby and some questions 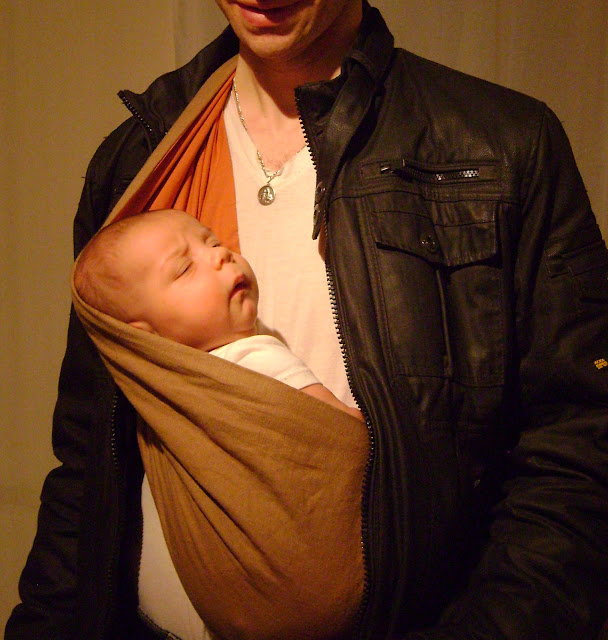 Working on his James Dean expression. My brother and his wife were sweet enough to send me this picture, showing that the sling fits Baby Isaac and is actually useful for the baby's genetic aversion to sleep. 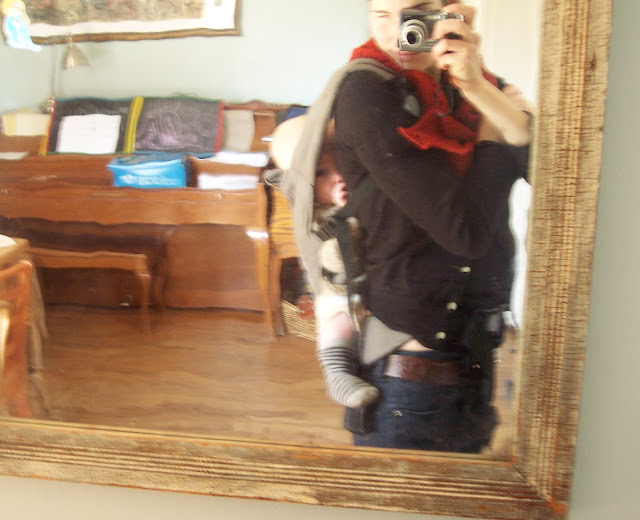 Meanwhile, back at the ranch, the Canadian cousin is an exclusively back-hugging marsupial. This mirror is about a thousand years old and my camera lens needs cleaning and it's hard to get a clean picture when you're jiggling up and down singing "Rafe-a-Rafe-a-Roo" 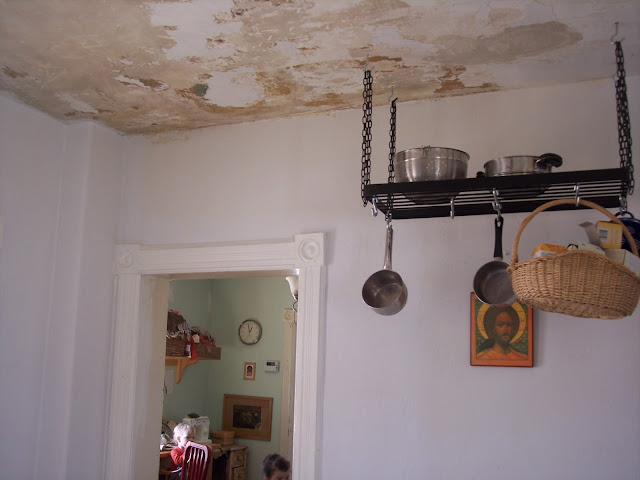 So on to my questions. I think it's time to paint that ceiling. My really hip, artsy friends love this ceiling—one even spoke of "patina," whereas I'm not really into the Third World look. Or should I say "emerging country" look? Suggestions? Should I spray some machine gun holes into the walls? Perhaps some political graffiti? A gecko?

And sisters, I have a really urgent hair question. Can someone with dry, frazzled, curly hair, like myself, have stylish bangs? Or would I have a pouff? I don't want a pouff.
Posted by Flying Squirrel at 12:30 AM 18 comments: 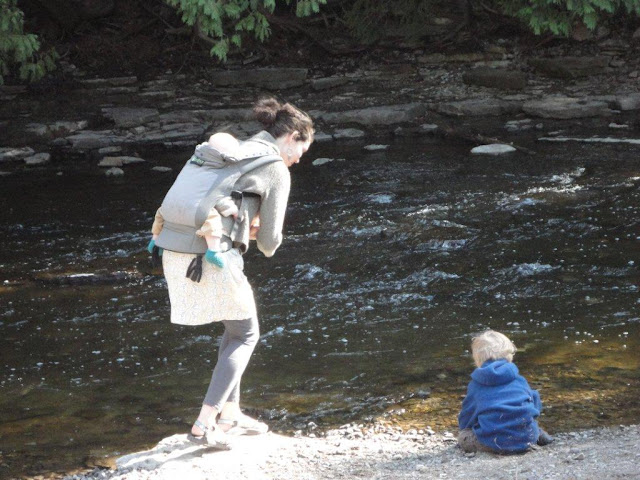 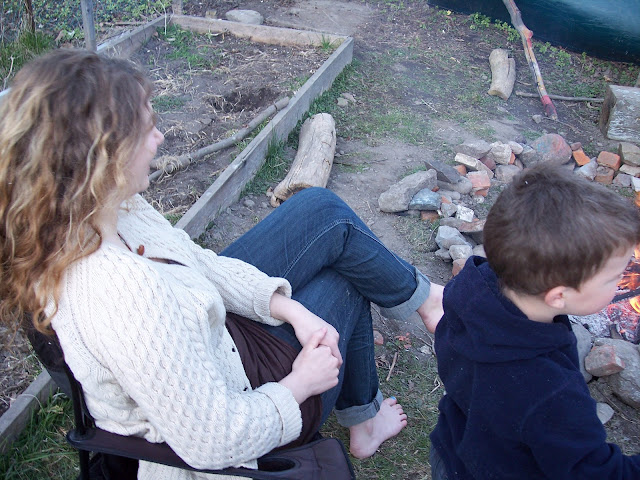 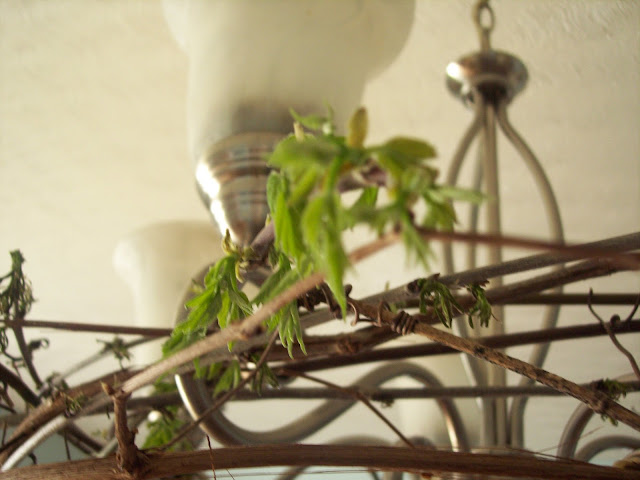 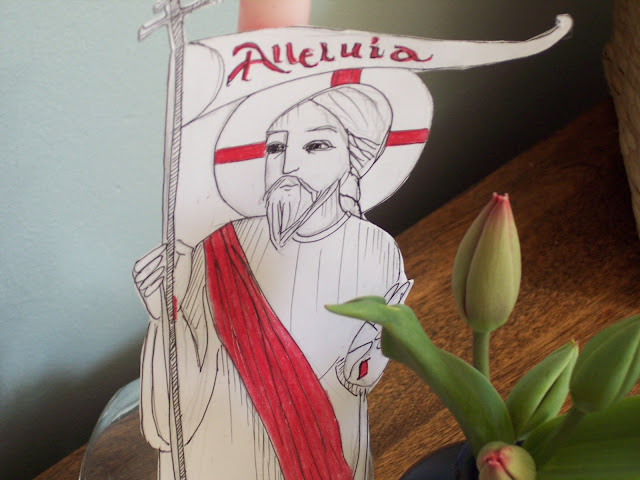 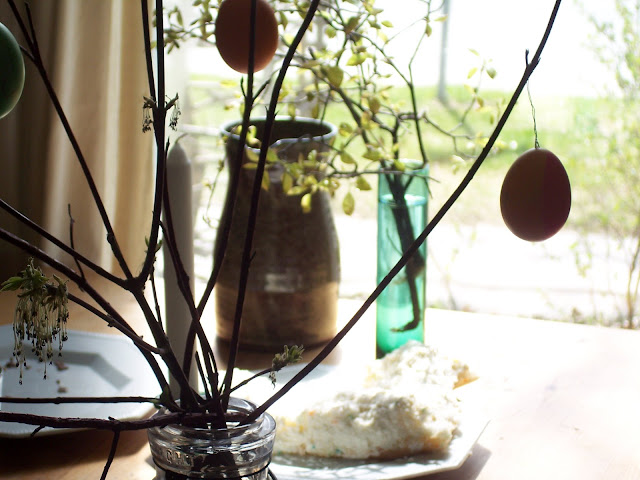 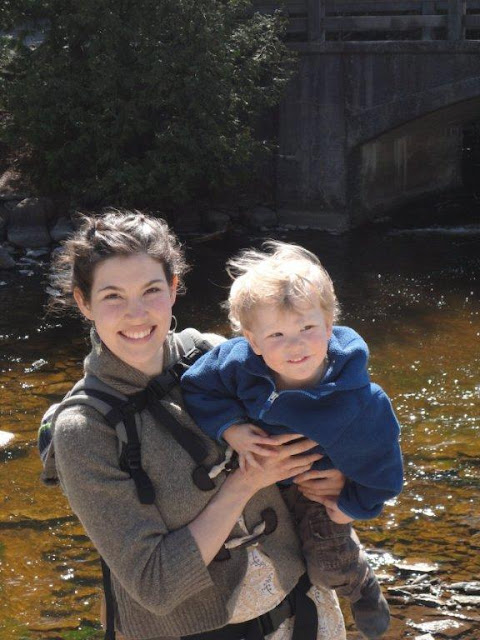 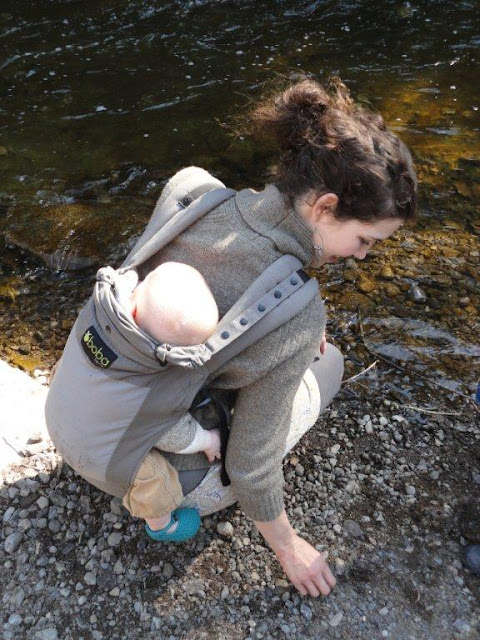 I hope you had a lovely Easter!

Ours was full of hikes, aunties and uncles, green budding branches, the first little tulips, bonfires and chocolate(—oh boy, have we had chocolate!) With my sisters departing for the West Coast and leaving to finish school, with the cousins newly arrived from Australia, it was delicious just to gather... 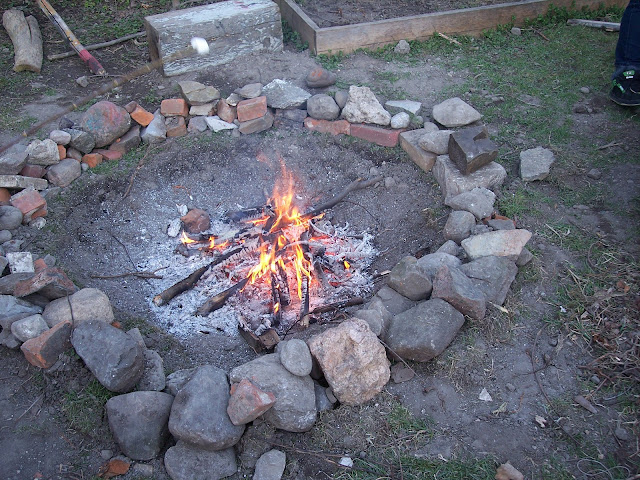 and remember that the light of Christ has come into the world...

Willie and his new home schooling friends dug an enormous fire pit in the back yard.
We heard a lot of good music from papa and the uncles—heavy on the Leonard Cohen, light on the Irish.

We ate and drank. We woke up and did it all over again!