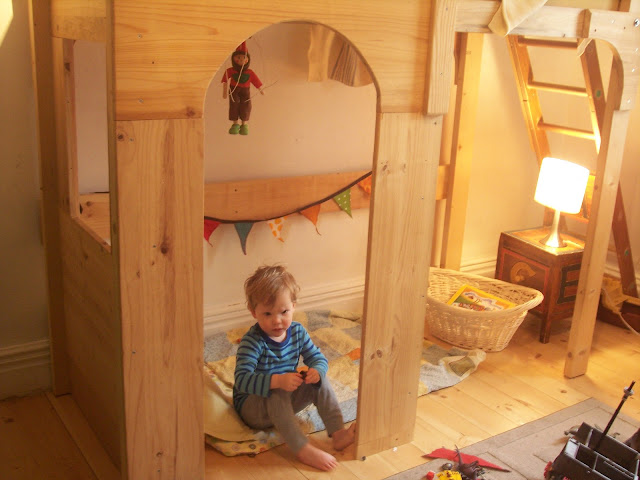 When our first baby, Willie, turned two, the problem of how to get him out of our bed and into his own little bed seemed to consume every waking hour for months and months. Would he ever do it? Would he ever sleep through the night? Would he cry every night? Would he be scarred for life? This crying—is it separation anxiety, or is he just tired?

I think I lived inside his head for the first three years of his life, anxiously wondering how each new experience would affect him. I wanted him to be attached to me (he was). But I also wanted sleep.

I talked to mothers of large families. They smiled distantly and said sorry, they couldn't remember how their toddlers slept. What? How could you forget something this traumatic and important?!

When Hugh came along, we were a little more tired, a little more heartless. As soon as he was old enough to sleep alone, we just tucked him into bed with Willie. We made a little ritual of lullabies and a lit candle. He would come back to our bed whenever he wanted. We cuddled him for a moment, but we always sent him back. He was fine. 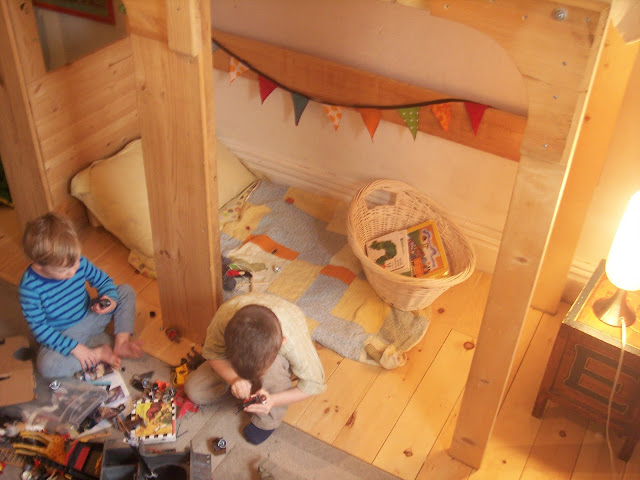 Matthias has the dubious luck of being the third born. Our sleep ritual goes something like this: Teeth are brushed, pajamas are donned—there is hilarity and violence between brothers as the room is tidied.  Matthias joins in the fun. Papa sings prayers and reads a story. Matthias scales furniture and drives his cars over people's heads. A candle is lit. Matthias blows it out. Ta ta Matthias!  Mama sings lullabies and rocks Matthias. (Or sometimes she just says goodnight.) Kisses and hugs. Then she says, "Matthias, where do you want to sleep?"

Sometimes he chooses mama and papa's bed. Sometimes he chooses not to go to bed. But usually he crawls in with a big brother and makes a nuisance of himself for half an hour. Then, when he starts to feel sleepy, he takes his pillow and blanket, and tucks himself into bed.

Doesn't that make your heart just bleed? He puts himself to bed!


I'm way, way too tired to feel guilt over this at 9 in the evening. So I made him his own little nook. It's special, it's cozy. His baby is there. His books are there. It's there when he needs it. 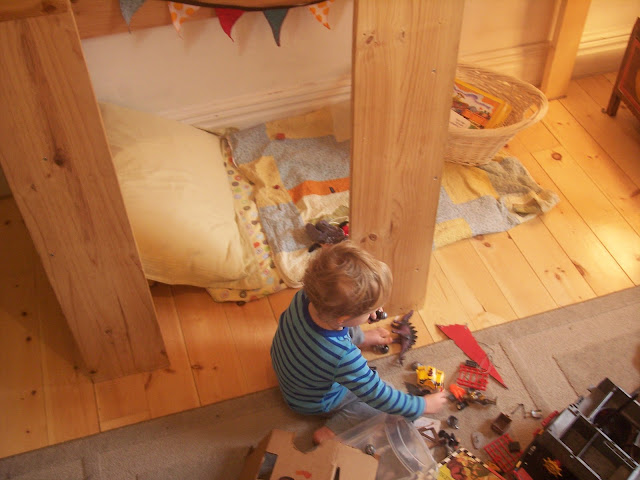 There was a time when our children weren't allowed toys in bed. We wanted a "sleep atmosphere"—no playing allowed! Our second child had cuddly toys. He was allowed to cuddle them quietly before sleep. Our third child plays noisily in the dark with anything that isn't a sharp implement. He falls asleep with six plastic guys under his back and a playmobile horse down his shirt (if he's wearing anything at all, that is...)

In the bunk above, big brother Willie watches out for everyone. In his little bed nearby, Hugh is breathing softly. (Hugh is a champion sleeper.) Mama and Papa are just around the corner. Matthias is getting sleepy. He crawls into his nook. He empties a bin of playmobile on himself. There, perfect. He curls up and goes to sleep.

Do you know what my amazing, brilliant, beautiful sister did on Valentine's Day? 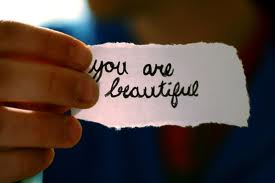 She made dozens of hand-written Valentine's Day cards, then went out to the streets of downtown Ottawa and gave them to anyone who looked homeless, sad, or down on their luck. She blogged about it here, on her cute descriptive writing blog; go check it out!

I'm totally doing this next year with my boys. We have lots of people in our own city who could use a little cheering up! Anybody want to join? I'll probably send a little message around Facebook next year to remind friends and family that Operation Spread Love is approaching....

Posted by Flying Squirrel at 9:09 AM 3 comments:

Gifts for Baby I 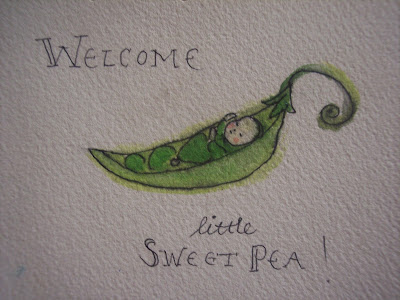 It's with great joy that we welcome baby Isaac, our first cousin! (on my side) This long-awaited, miracle boy, so sweet, so loved, was born a few days ago at his home in Sweden. It will be a long time before we get to hold him and kiss his little head, so we're putting together a "welcome baby" parcel for Baby I. 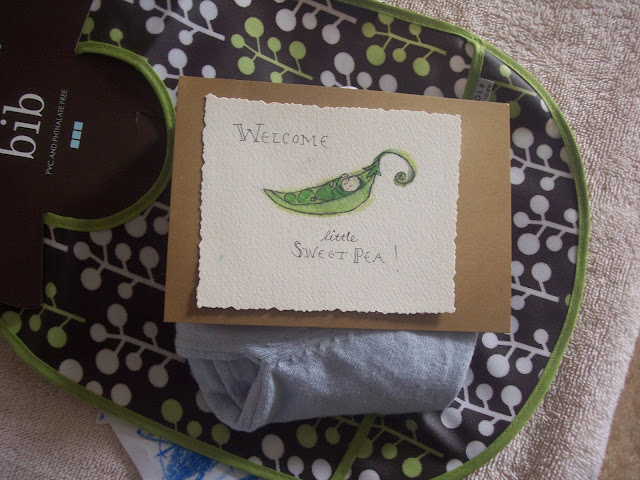 Some sundry useful gifts, including some painting and some of Hugh's awesome paper dolls, complete with paper fireballs for paper doll fights. (Every new baby needs a starter collection of fighting paper dolls, right?)

And a baby sling—which I tried to photograph while wearing—made from a linen skirt and an orange* bed sheet. Very thrifty and very beautiful. I'm tempted to keep it! But don't worry, Baby I, it's going in the mail tomorrow.

I'm hoping that Baby I's parents are too busy looking at Baby I to read blogs. But if not, here's the sneak peak.... 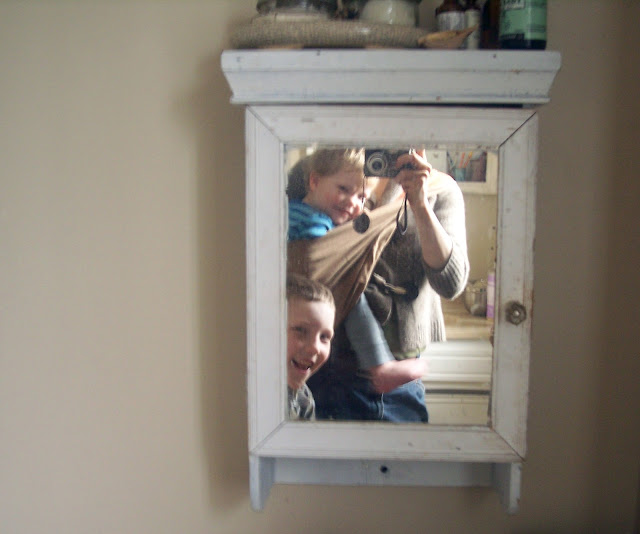 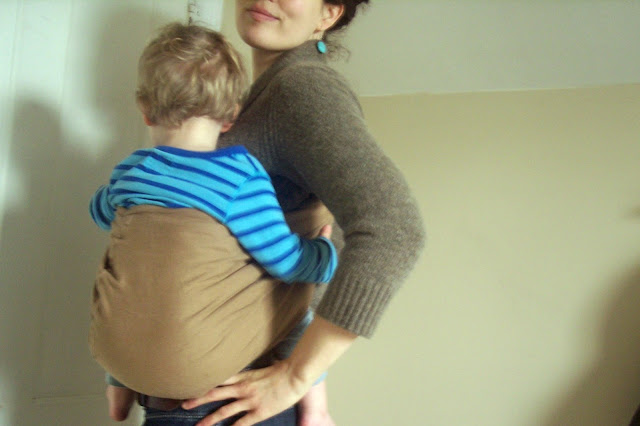 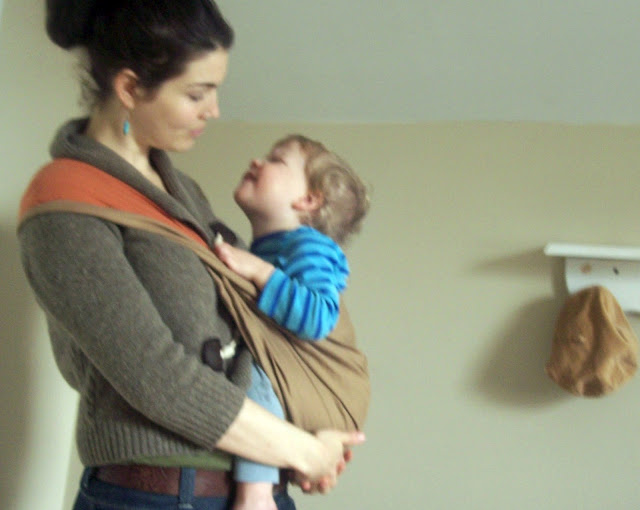 A newborn cuddling sling! (sling is stuffed with a sweater in this picture...it will hang tighter with a strapping baby inside.) 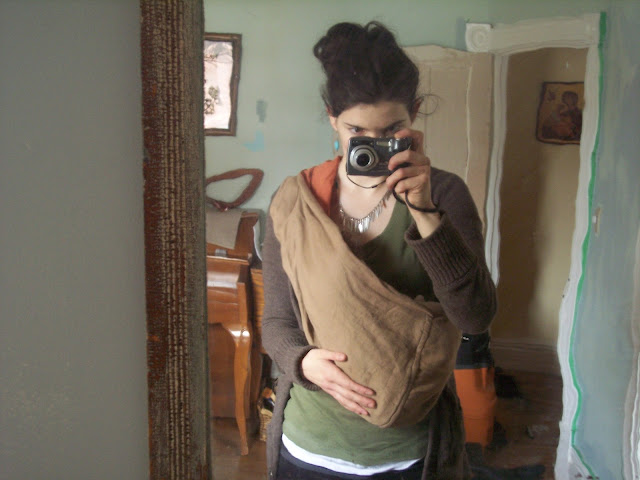 Ah, that linen! So beautiful.

*By orange, Joe, I don't mean anything bright and 70's. It's a nice, quiet, modern, man-friendly orange. A polite, intelligent orange—a Swedish orange.

We had so much fun making our presents. 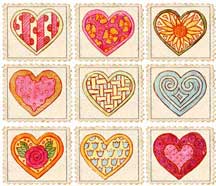 Just a link—not mine!—to these adorable paper projects for Valentine's Day. (They'd be a lot more adorable with a colour printer, but black and white is great too)... 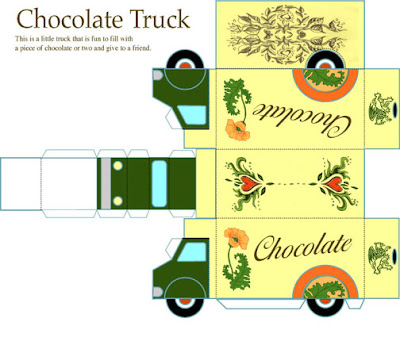 You can see why we're completely captivated by these lovely, whimsical free printouts!

Bear in a box? 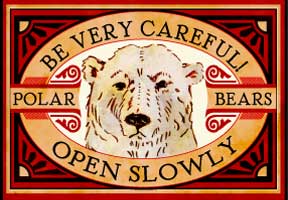 They're from the wonderful toymaker....go check it out! It's a great resource for the last, draggy-onny, cold days of winter....

More home schooling means less crafting (unless I decide to stay up till two and pay the awful price.)

But knitting is always there! It lies quietly in the basket (or rather, squashed between the couch cushions) ready for that quiet moment when mama and baby can stop everything for a few minutes.

I'm working on this lovely shawl. 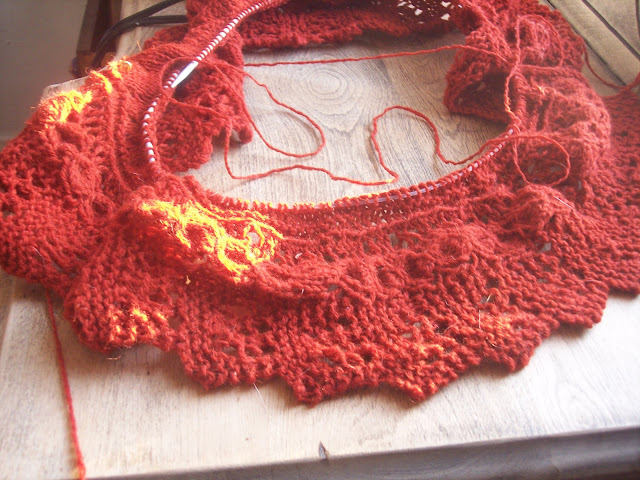 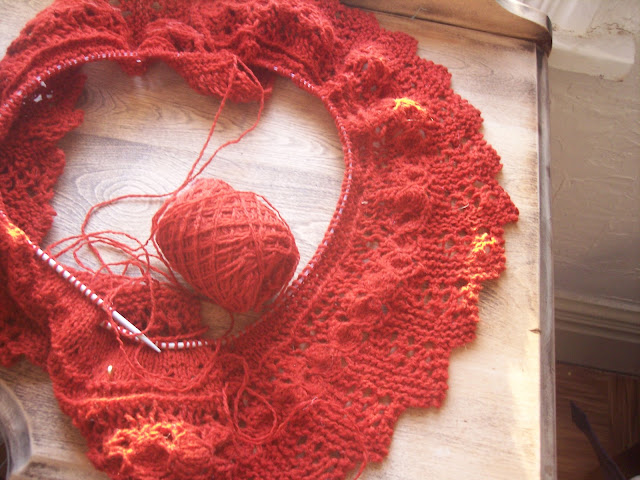 The pattern is simple and ingenious, once I figured it out. I'm a little misgiving about the colour. Such a brilliant rust, was it ever seen outside of the 1970? 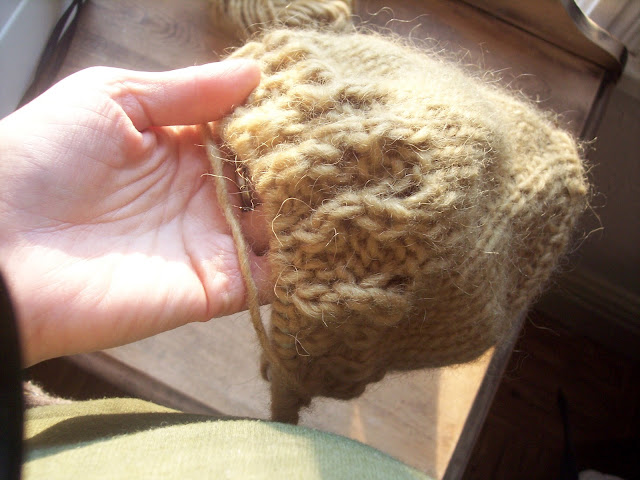 The beginnings of this hat, which becomes a completely different hat in chunky wool. It doesnt look like anything at the moment, but it should look like a cute little acorn top in the end. There's a type of person, a really funky, pretty blonde who rocks a short hair cut and is expecting her first baby, who can pull off a hat like this.

And one for baby, too! 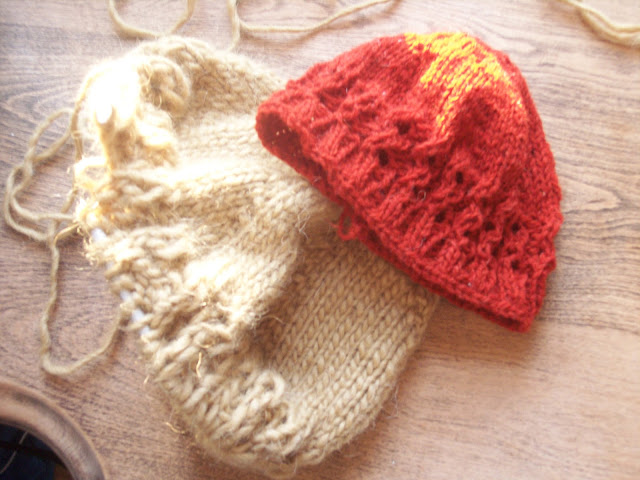 And some skate socks for a big hockey-playing boy. Though hockey season might be over by the time the socks are done. 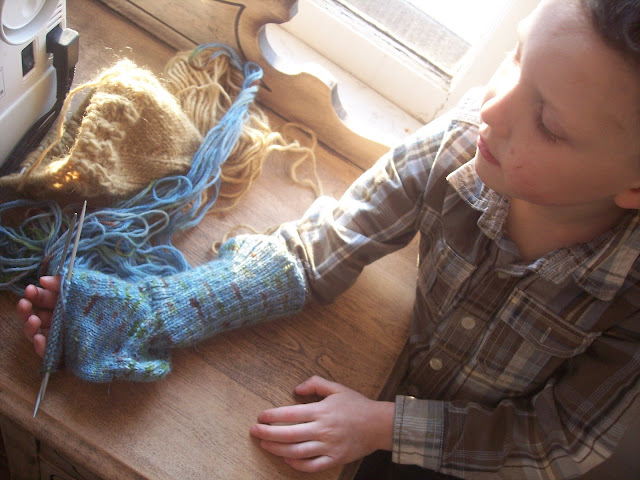 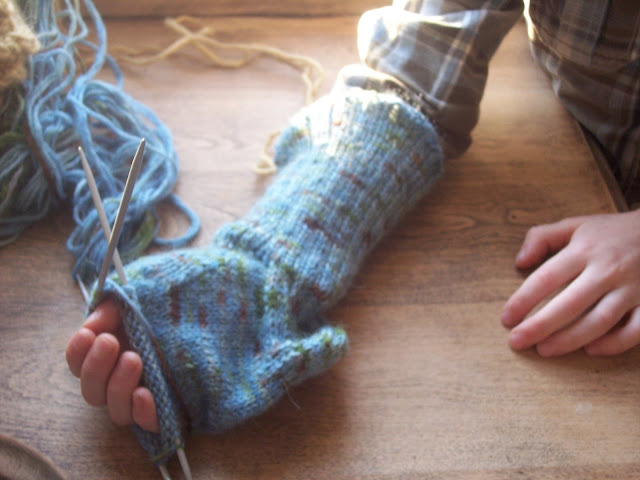 And some bunting for Matthias, just because. 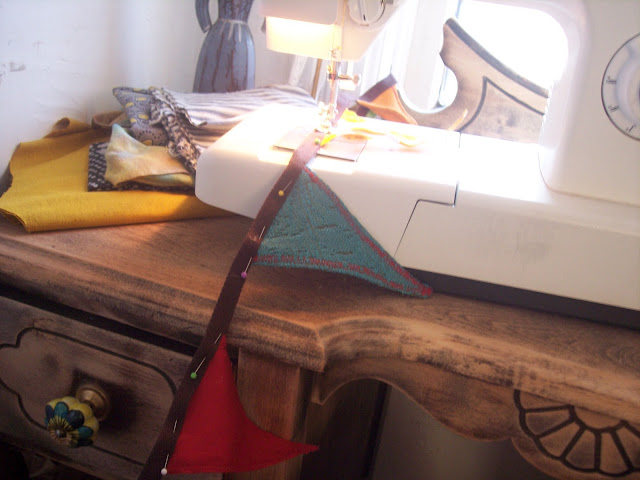 And that's all for crafts, folks.
Posted by Flying Squirrel at 9:49 PM 3 comments: 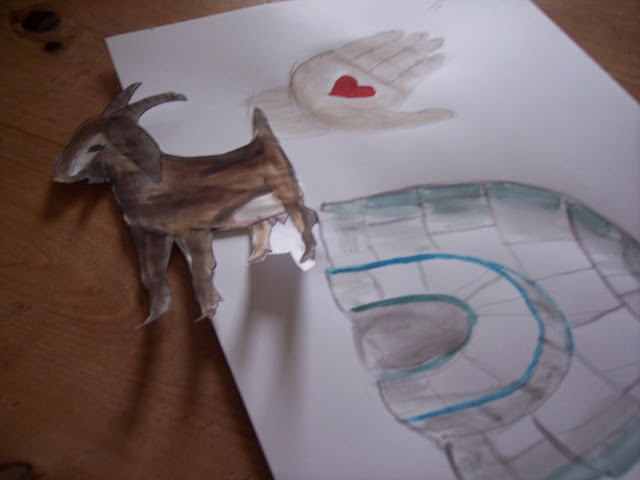 Hugh is learning the phonetic alphabet song "a-a-apple, b-b-ball" and I'm making him a little alphabet garland to hang up in his room. There's i-i-igloo and g-g-goat and h-h-hand. 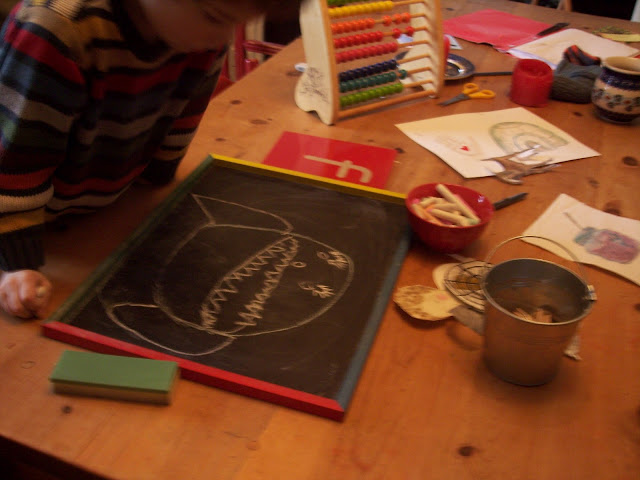 Forgive the blurry photo but I had to show you Hugh's drawing. He was supposed to be practicing the letter "F" on the chalk board. I turned my back for a few minutes and he made this awesome "flying goblin" instead. (Check out the eyelashes! And the mouth! It's always so interesting what four-year-old-artists notice about the face. Hugh notices eyelashes and teeth. He always draws the mouth extra-wide to make room for all the teeth he has planned.) I wish I could have kept it forever. I believe I forbad him from erasing it for the rest of the day.
Posted by Flying Squirrel at 11:01 PM 3 comments: