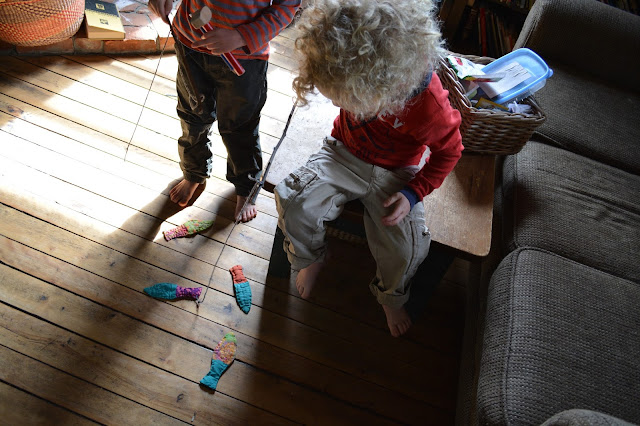 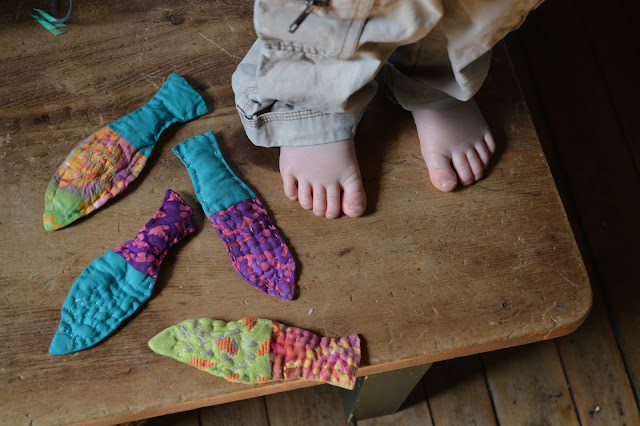 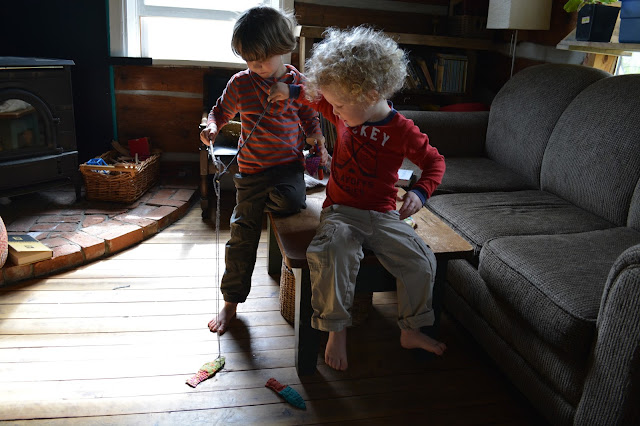 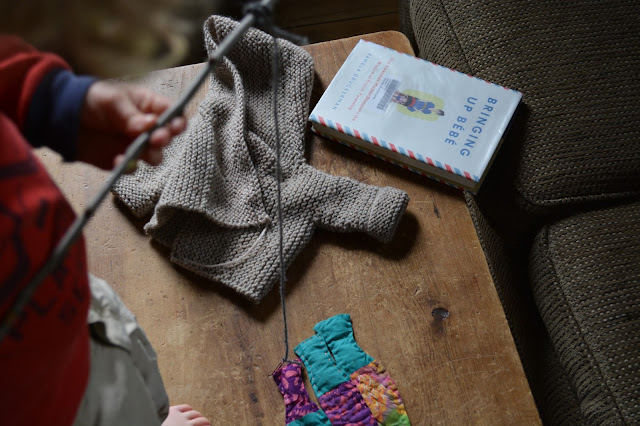 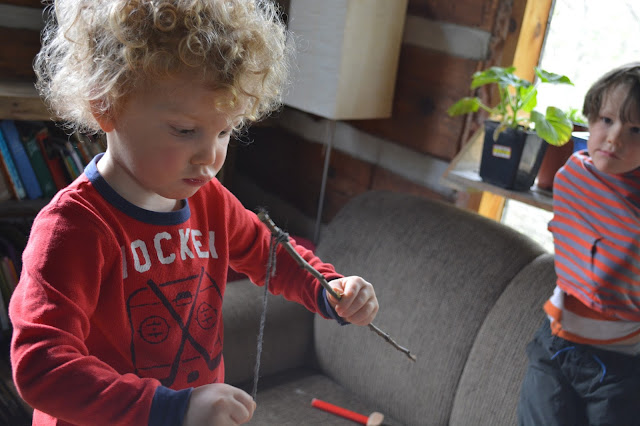 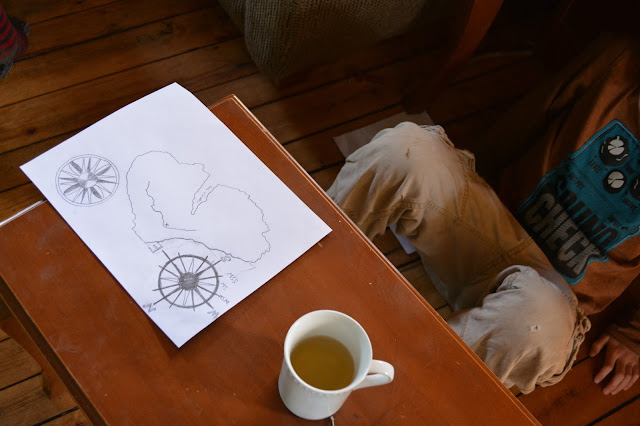 This was a little project I made for Rafe. All our children love the fishing game ubiquitous at outdoor play parties...you know, the little plastic rod and magnetic sea creatures in the kiddie pool. My older kids willingly line up with the toddlers to get their turn. We've gone through a few crappy little sets from the dollar-store, and always ended sweeping them into the bin.

Oh the plastic, all that plastic!

So I made some fabric fishes for Raphael for Christmas. Amazingly, they've lasted almost six months. They are lightly padded with cotton batting and quilted with a few large stitches of embroidery thread. A little magnet sits in it's nose, held in by a few stitches.


It keeps everyone busy on a rainy afternoon.
Posted by Flying Squirrel at 7:26 PM 2 comments: Links to this post


Last year, before doctoral studies got intense, Will started the Hippie Heretic blog for his farming and creative enterprises. Alas he wasn't able to keep it up. So here I am showing off some of the lovely things he's making and doing. 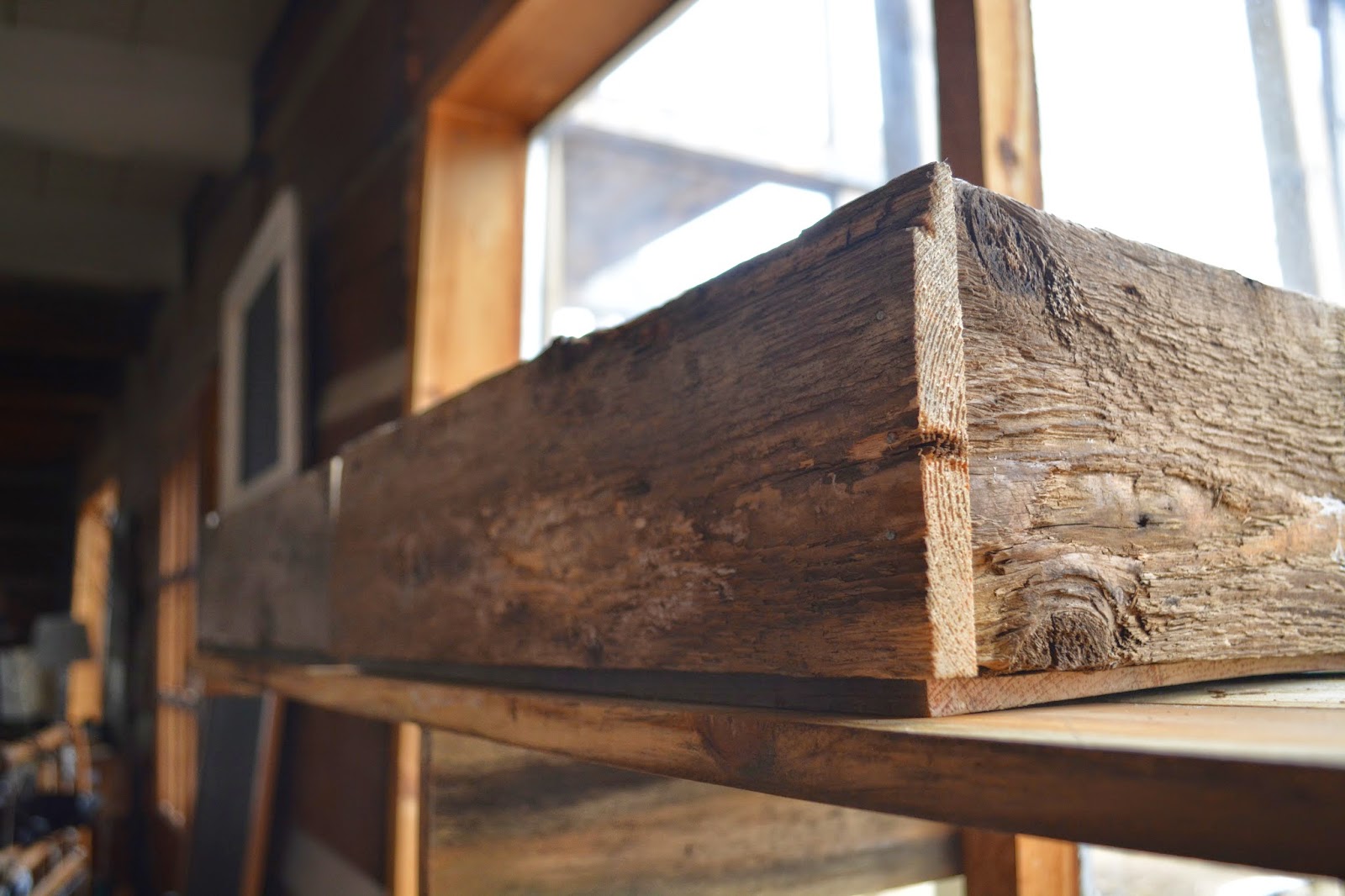 I confess I am very covetous and hopeful (Will, are you reading?) that someday I will have a collection of my own. Will made them deep for establishing strong root systems and carved handles on the side. They are stackable. How awesome is that? 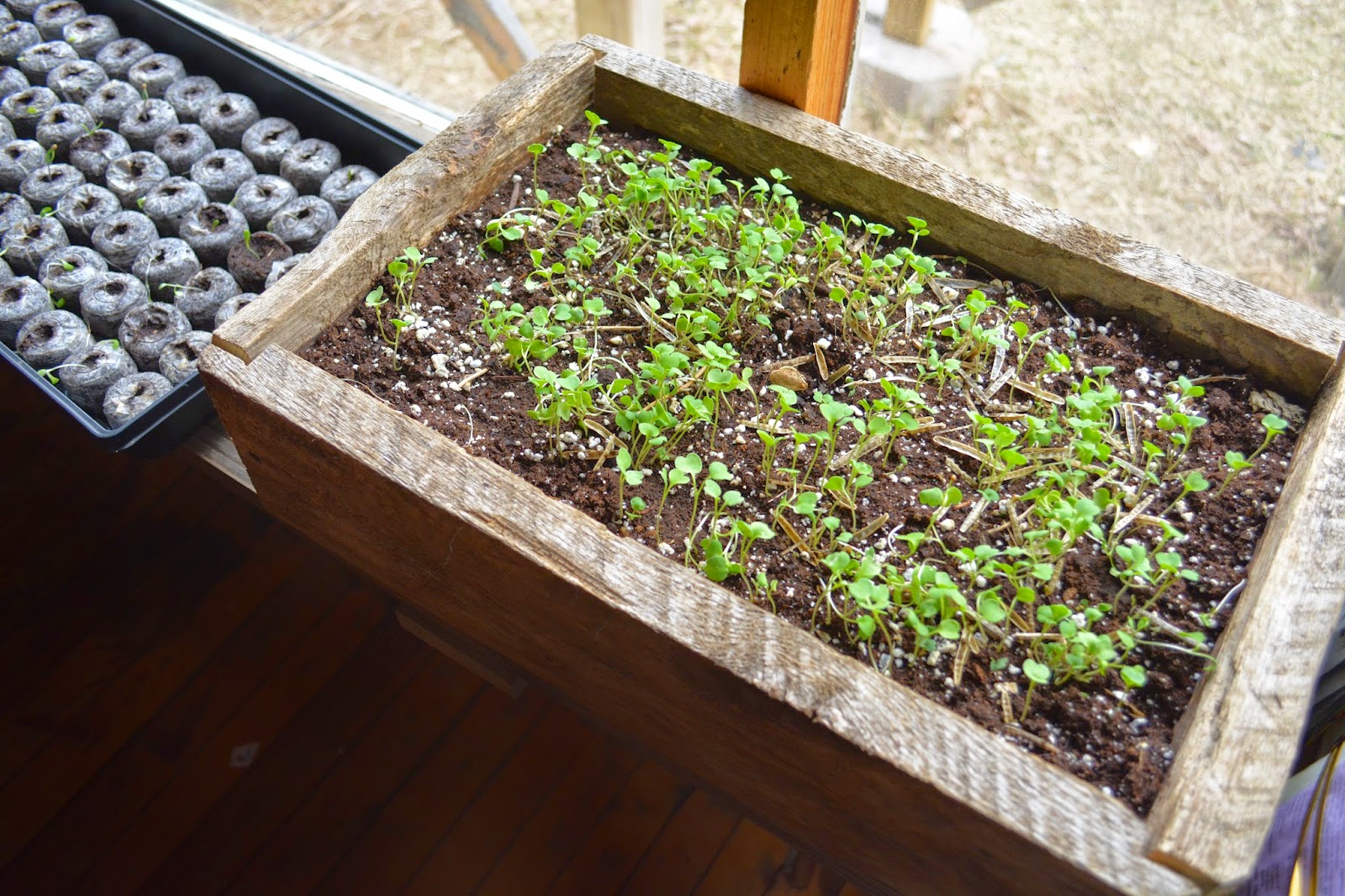 This whole farming thing was 100% Will's project. I get to have all the fun of a farm, like visiting the miniature roosters and taking pictures of pretty things, without doing any of the work. (I do wash quite a lot of milk jars though.) 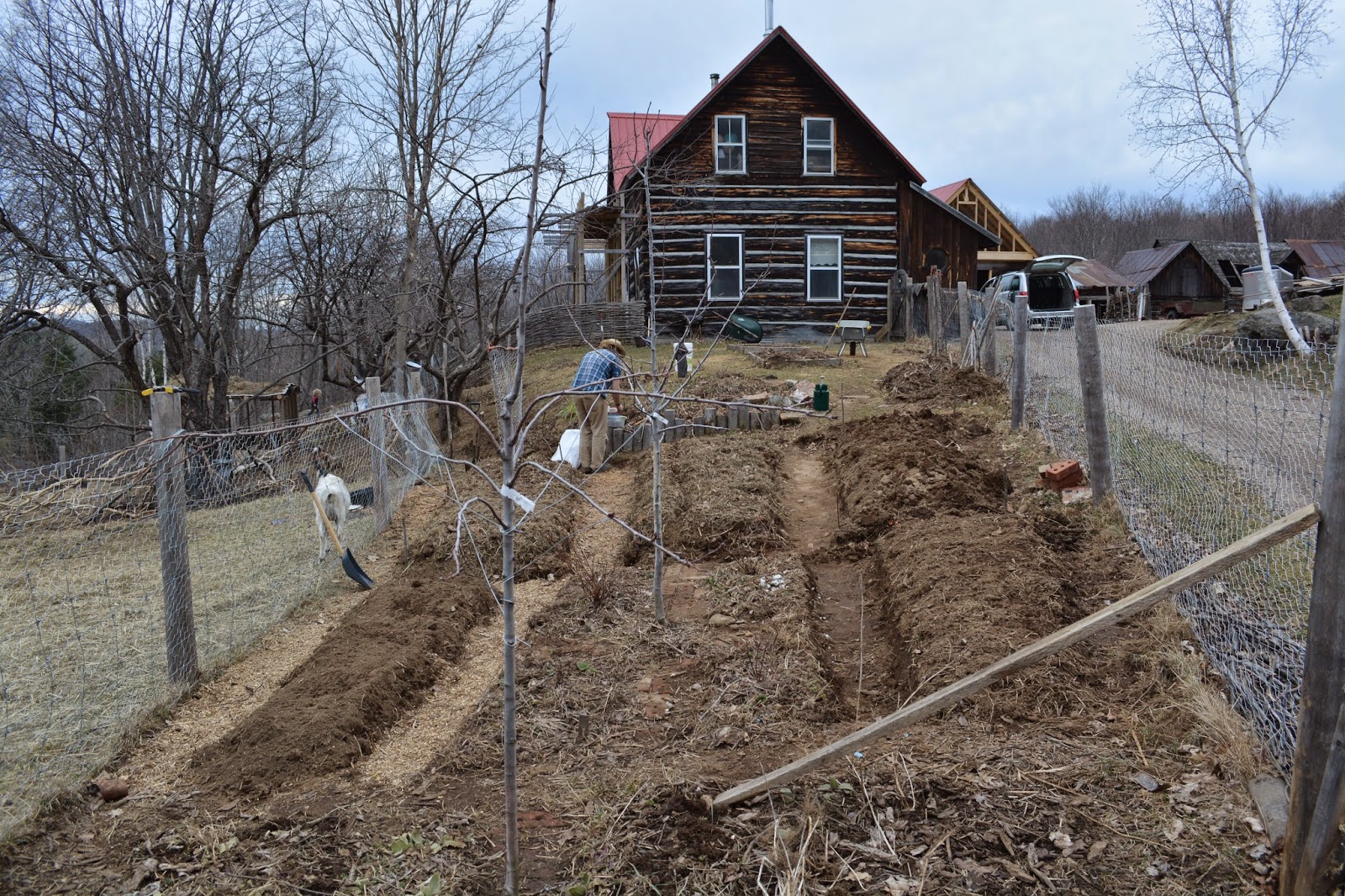 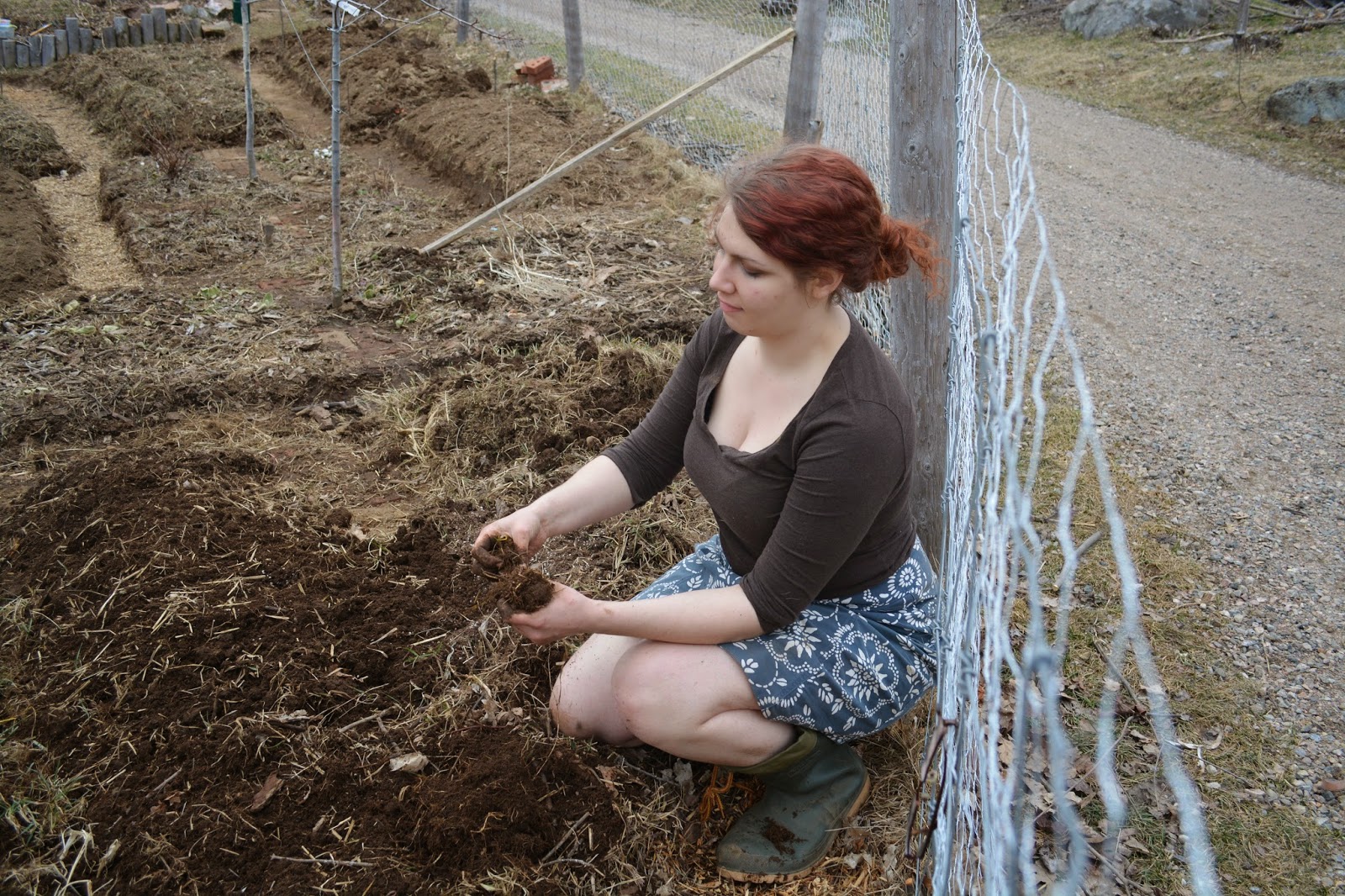 Angela is now off to England to work at a L'Arche community in London, and then off for a wwoofing adventure throughout the British Isles. 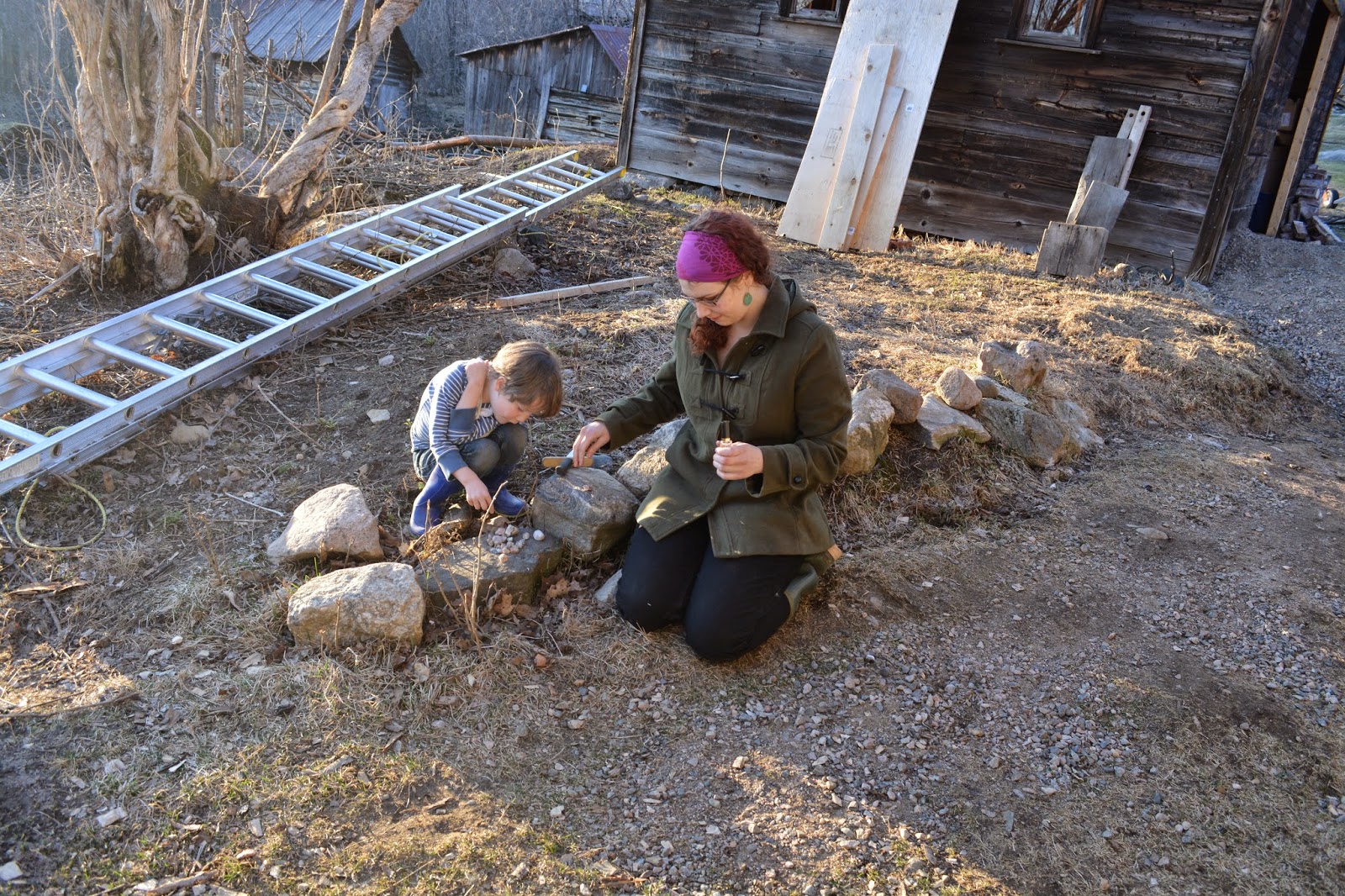 Oh she will be so missed! 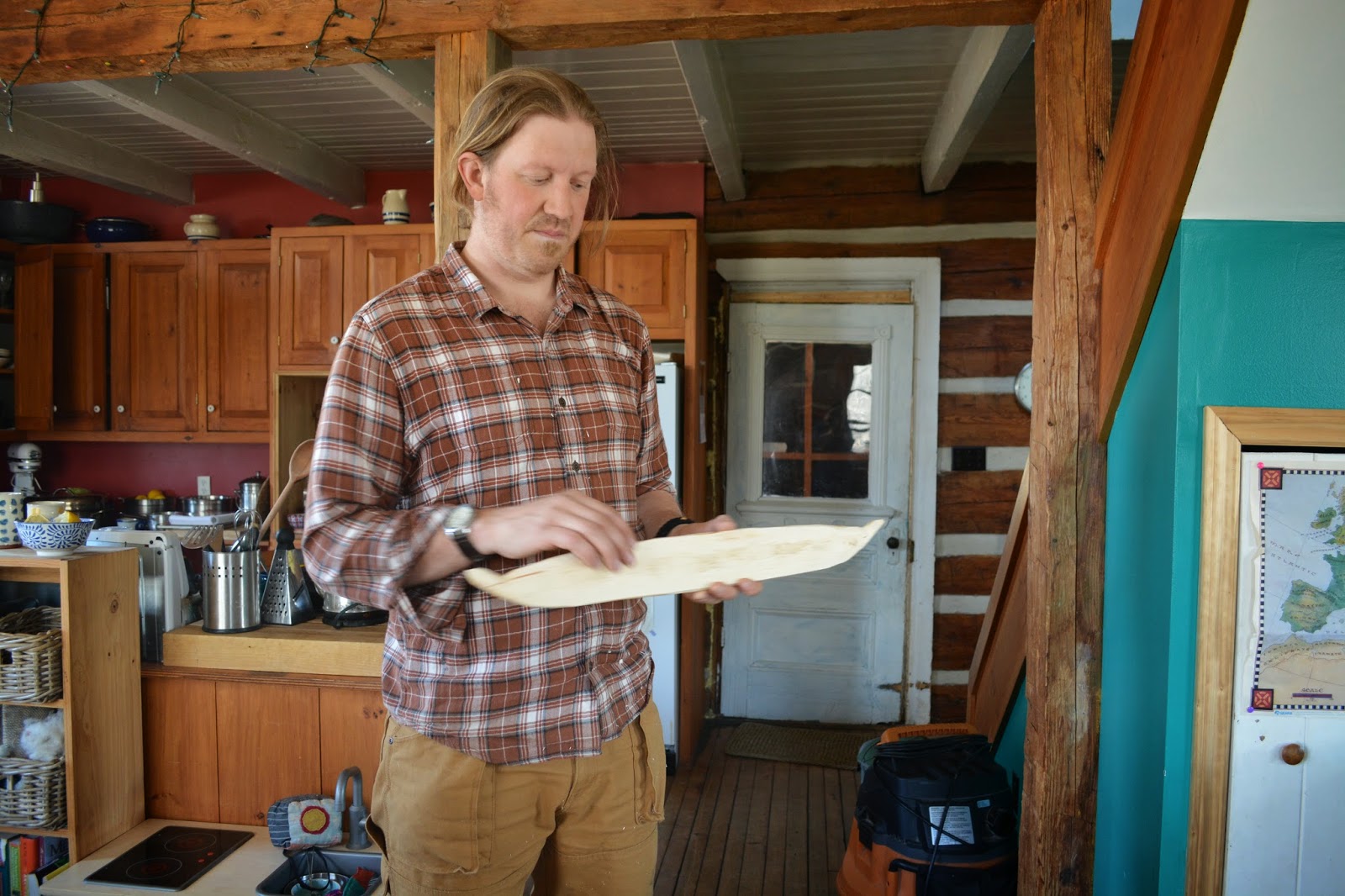 Will also did our first large-animal butchering on the farm. We all had mixed feelings about it. Will spent a quiet and sombre day preparing. We gave the children the choice of staying to watch or going away with mama. I was prepared to nudge them away, but they had already decided, wisely, not to watch the slaughter. Our goat was dispatched as humanely and quickly as possible, but like all our animals it was named and known and loved personally. It would have been too sad for the boys.

However, once the goat was skinned and looking like meat instead of a living animal, they were all over the butchering. And I'm OK with that. They are carnivores after all.

As parents, the best we can do is teach them to be responsible and gentle with animals in life, humane in death. 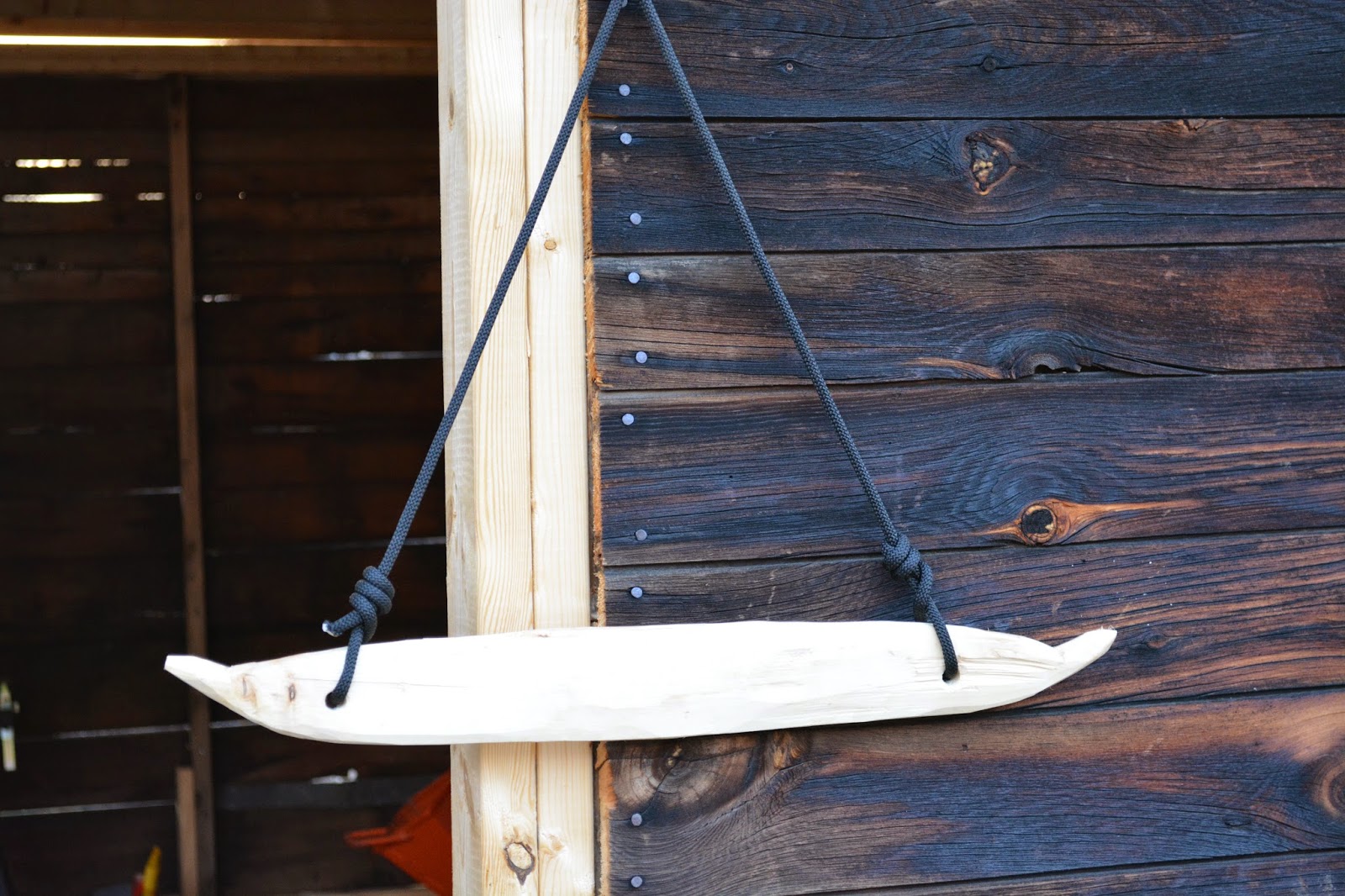 Will carved a thing. (Gambrel?) You hang carcasses on it. It's all very grim, but I'm in love with the fact that he carved it.

All gory butcher scenes have been removed. The final stages were quick and skillful. Will's father was a butcher (among other trades) and all the Pembertons seem to have a special affinity with knives and meat. Will sharpened up our kitchen knives and made short work of cutting and wrapping. I definitely have a new respect for meat. I wasn't expecting it all to mean so much: my gratitude for the life of this animal, for the work of my husband and the little hands that cared for it, for the skill and labour that went into processing it, and quite simply, the sacrifice of a life so we can eat. I am humbled. 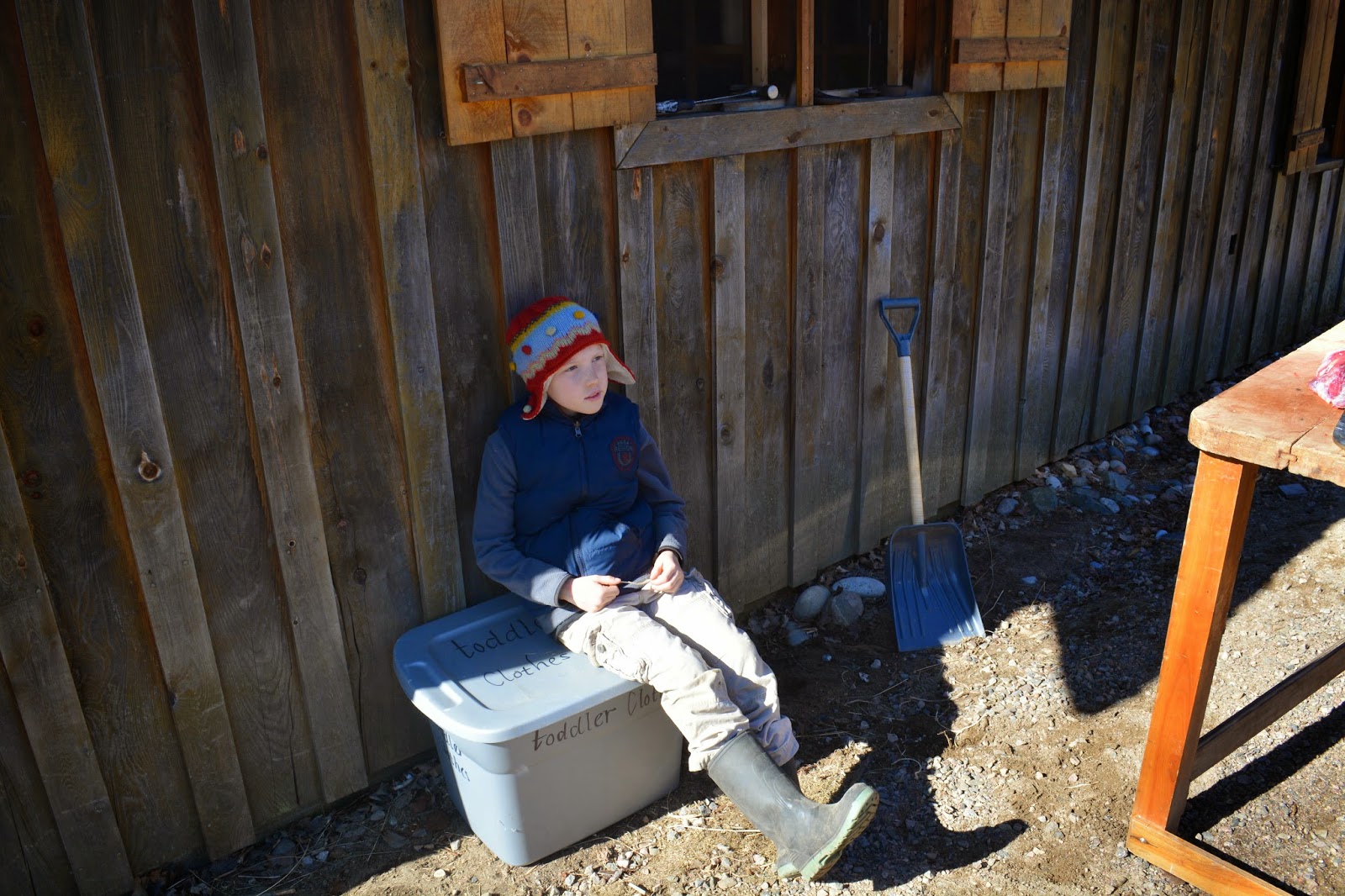 The boys were all over it, helping where they could, watching everything, soaking it up. They asked for, and got, the hide which Willy salted and stretched. Not before the dogs got it, though, which turned it into the Wiley Coyote Roadkill pelt. The boys want it for a rug. Oh dear. 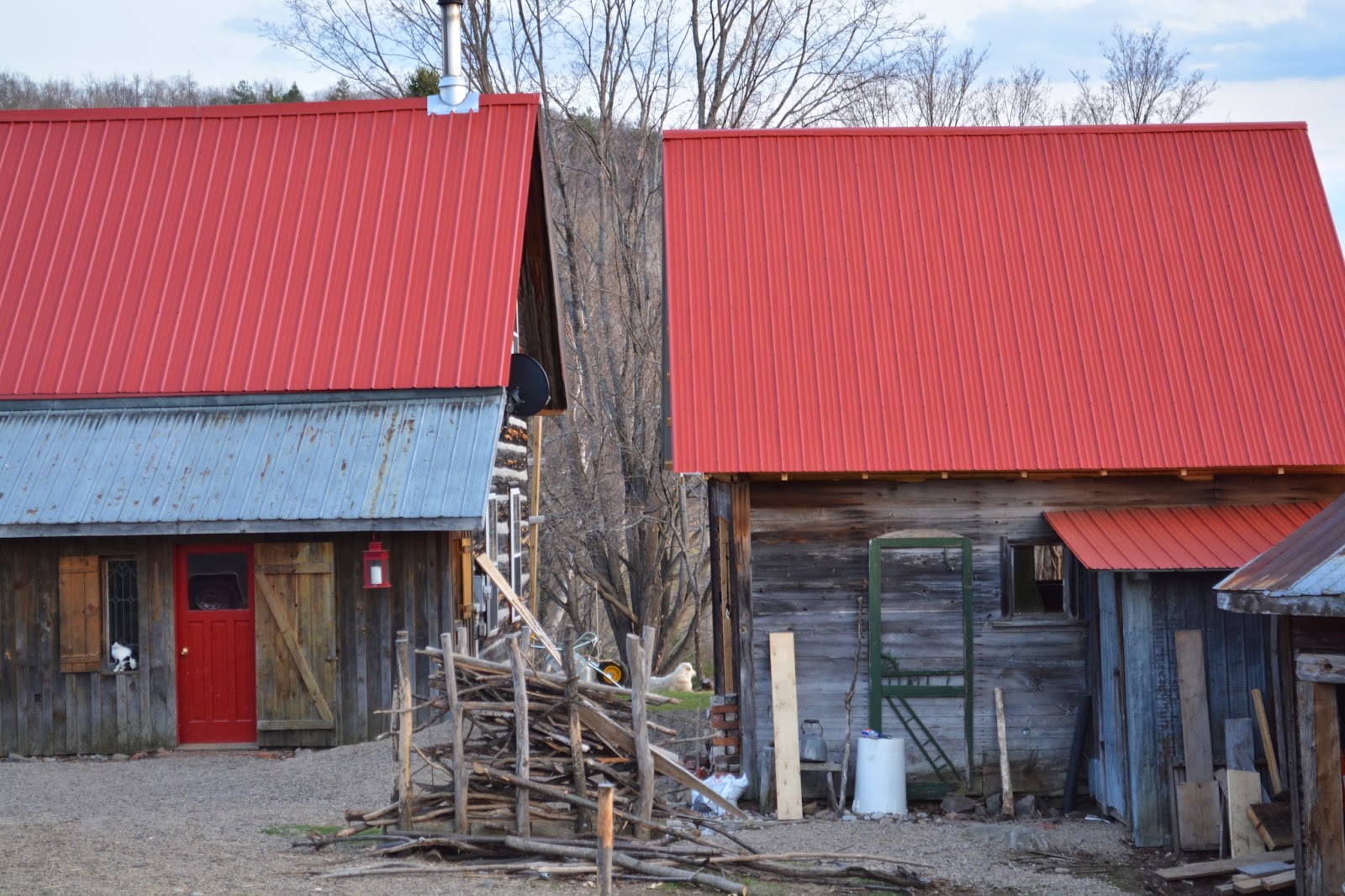 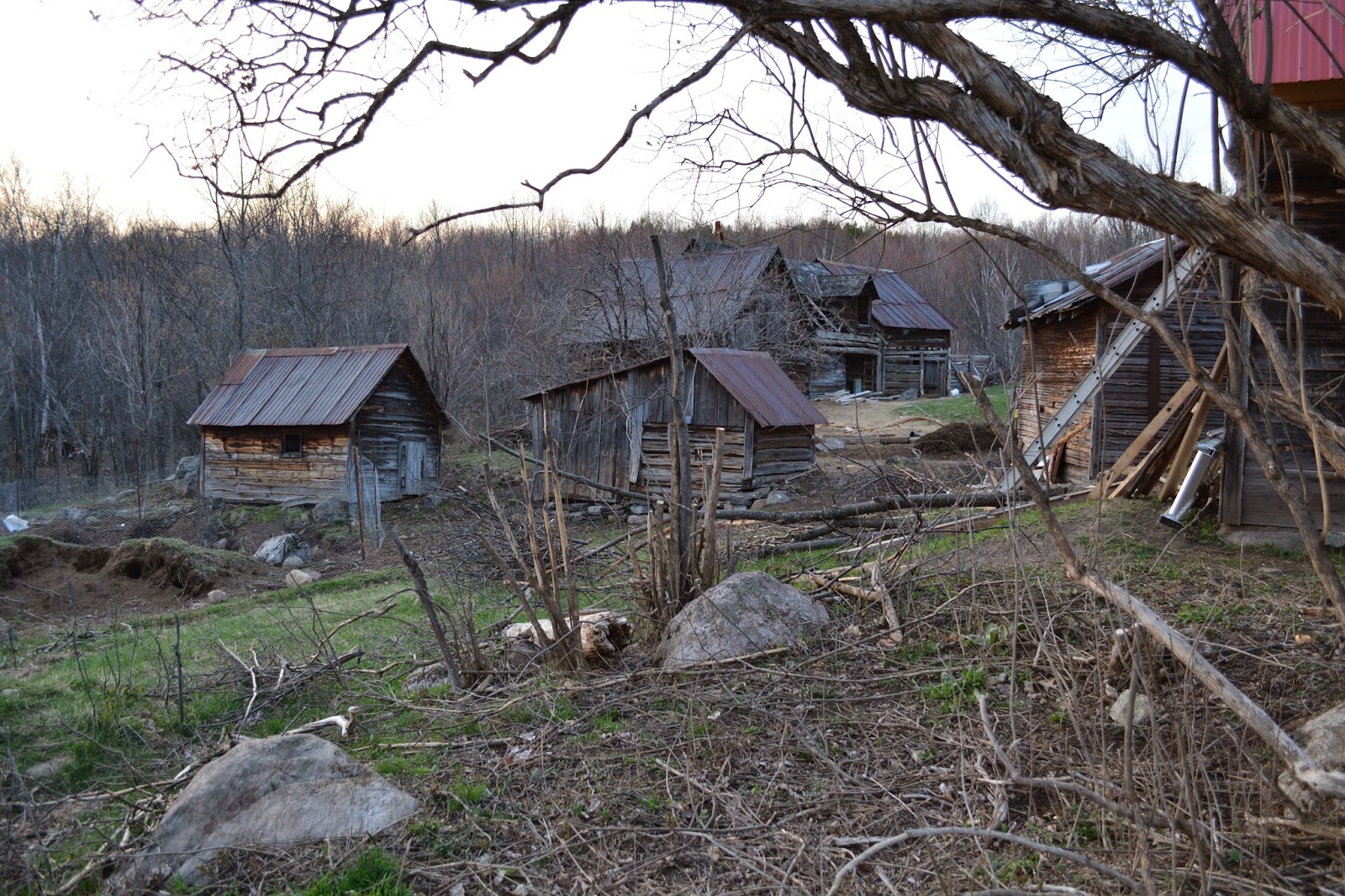 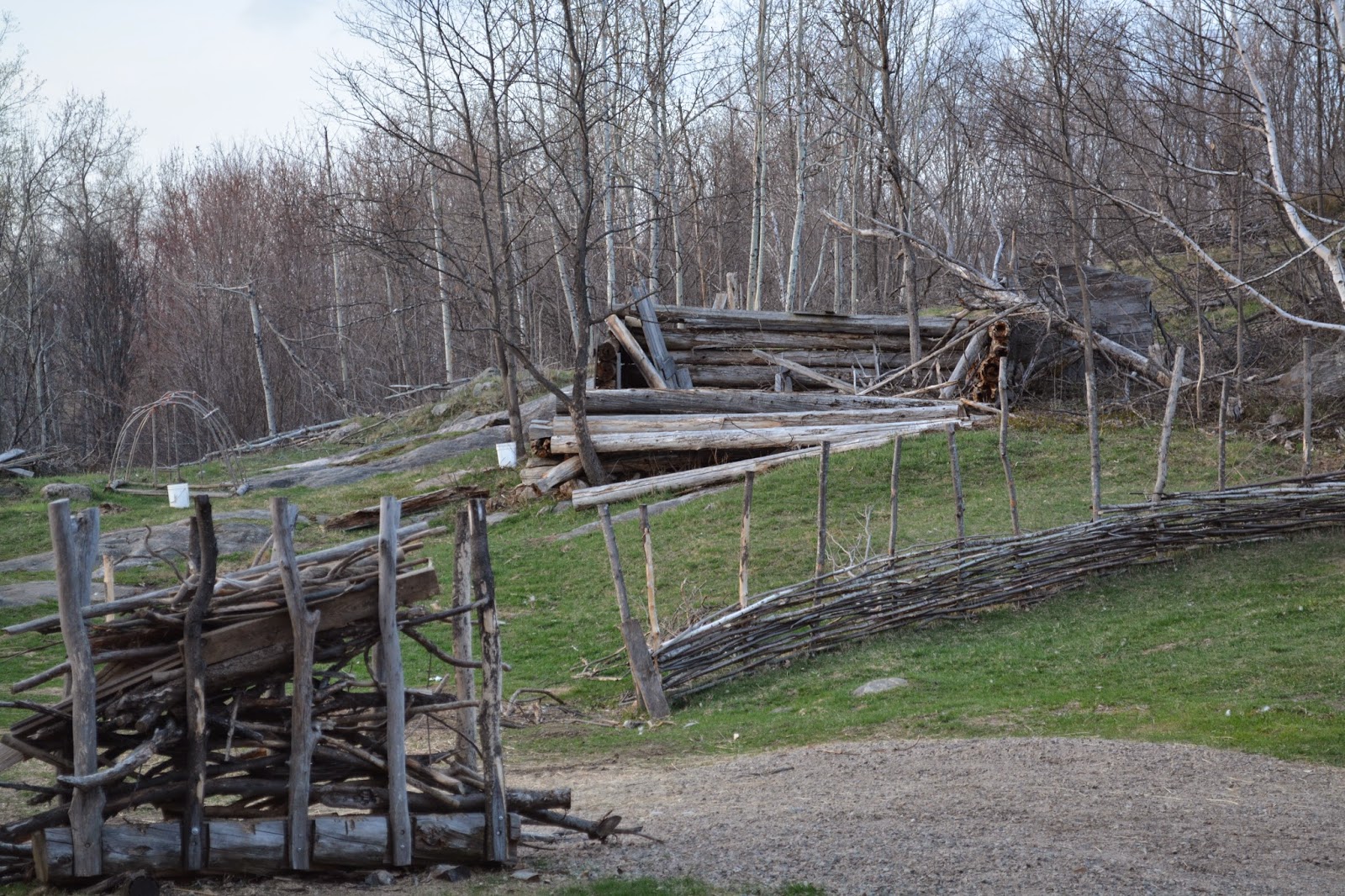 This ramshackle place is slowly being cleaned up, scythed down, raked up, rebuilt. Slowly. The discovery of the year was a MINE of topsoil. Also the discovery that all the weeds and brambles Will scythed last year have proved an effective deep mulch for this year's garden. The worms came up but not the weeds. Will dug a new garden behind the barns for his experimental crops....amaranth, quinoa, kamut, lentils, blue corn, chick peas. 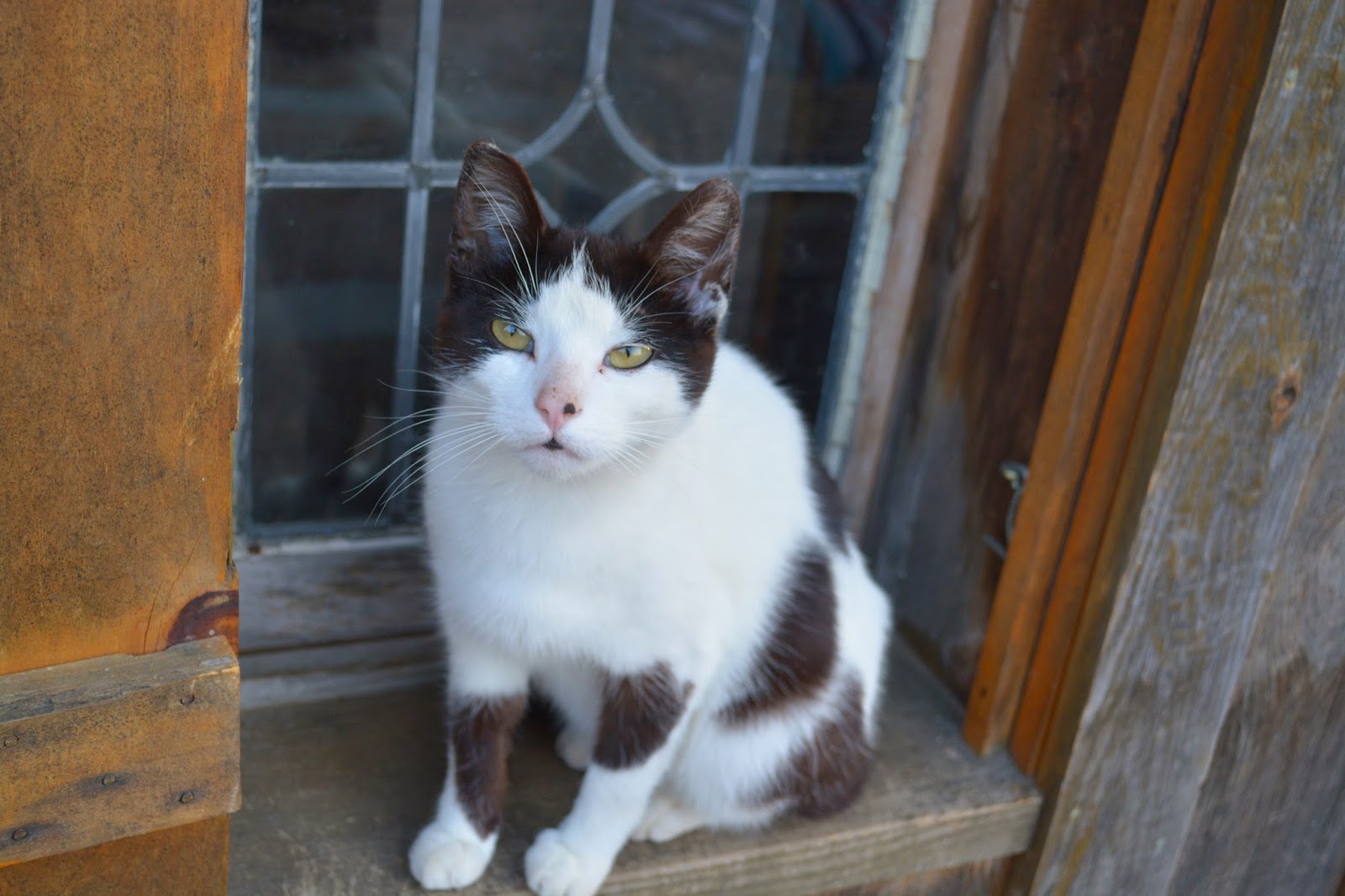 And below: kids work! I came outside to find this cooperative effort going on. They have repurposed one of Will's chicken coops into an Iroquois lodge. Off to the woods. (I was never such a big fan of binder twine and chicken wire architecture, practical as it is. I felt embarrassed every time I looked at it.) It is now waiting in the woods for bough and bark cladding. 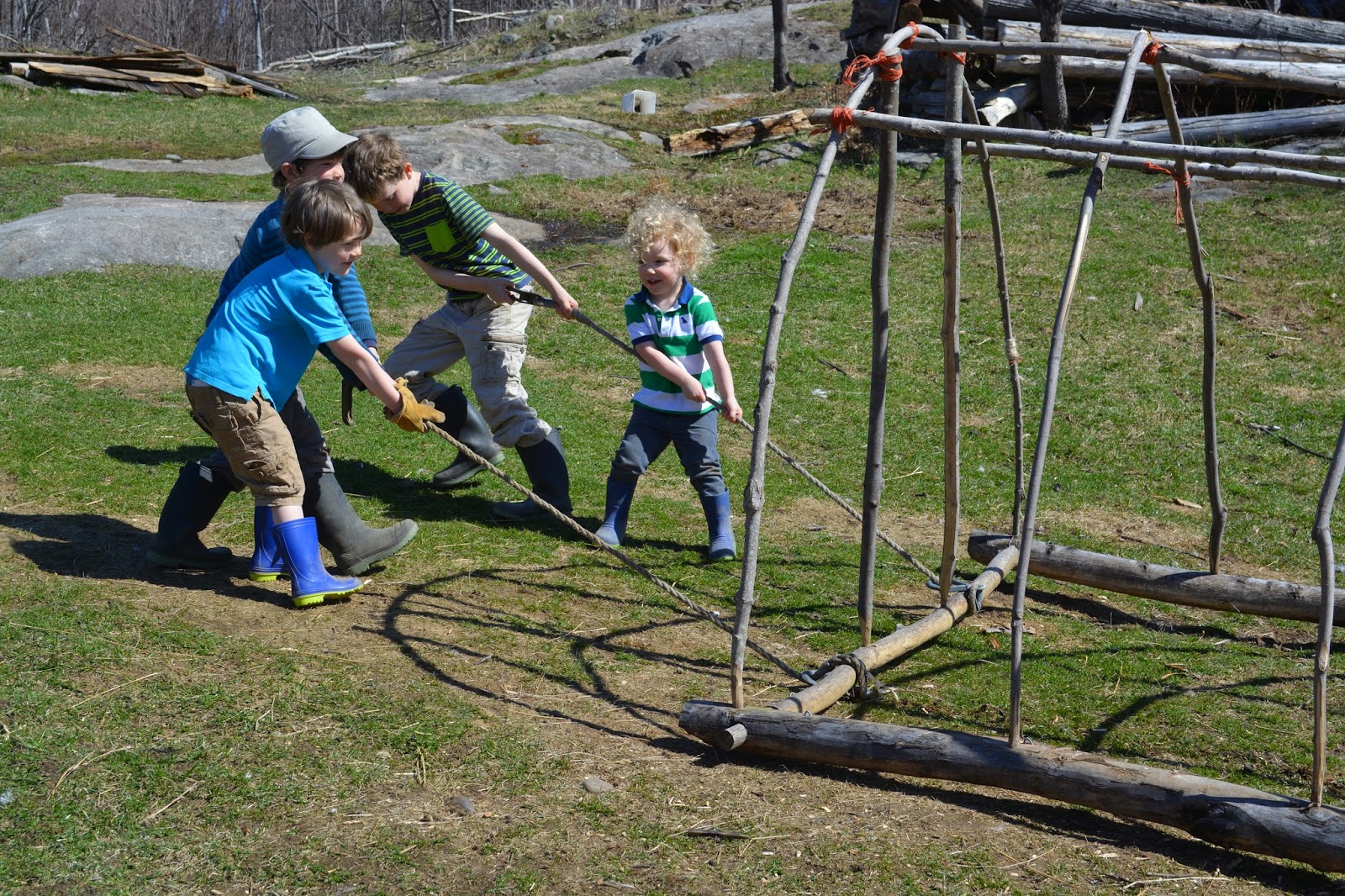 The best part was the sea chanties they were singing. Our kids are big fans of the movie Master and Commander and know all the songs.

And speaking of the Far Side of the World, my sister Elizabeth is doing a sailing voyage from New Zealand to Tonga, along with seafaring Uncle and Aunt. She is blogging about it here.
Posted by Flying Squirrel at 10:22 PM No comments: Links to this post